CAMERA is a US-based Zionist group that portrays itself as "reporting" and "analyzing" the Middle East. But, its website is full of attacks, mystifications, and isn't about the Middle East but about the Israelis and against anything that relates to the Palestinians. The organization is also active on Wikipedia were it in 2010 began to incite supporters of the Israelis by providing hasbara knowledge needed to alter entries to disseminate which makes Wikipedia no longer neutral on this issue. For example:

"Claims emanating from certain circles within Palestinian society and their supporters, proposing that Palestinians have direct ancestral connections to the ancient Canaanites, without an intermediate Israelite link, has been an issue of contention within the context of the Israeli–Palestinian conflict."

But, what does history show?

A number of pre-British Mandatory (of Palestine) Zionists, from Ahad Ha'am and Ber Borochov to David Ben-Gurion and Yitzhak Ben Zvi thought of the Palestinian peasant population as descended from the ancient biblical Hebrews, but this belief was disowned when its ideological implications became problematic. Ahad Ha'am believed that,

"the Moslems [of Palestine] are the ancient residents of the land ... who became Christians on the rise of Christianity and became Moslems on the arrival of Islam."

Israel Belkind, the founder of the Bilu movement also have said that the Palestinian Arabs were the blood brothers of the Jews. Ber Borochov, one of the key ideological architects of Marxist Zionism, claimed as early as 1905 that.

These statements have one thing in common: they are related to the question: who is indigenous?

However, there are several definitions about 'indigenous', one of which we prefer to follow: the definition that refers to the notion of a place-based human ethnic culture that has not migrated from its homeland, and is not a settler or colonial population.

We didn't mention the possibility to define the roots of an ethnic group by using (medical) scientific methods such as generic profiling.

But, to be able to do such profile, you need samples of the very first people to match them with samples of today's people, not the samples of people from a cherry picked (Canaan) era or samples from a cherry picked (Jewish) group of people like the diagram below is showing. It looks very identical to similar diagrams but about the distribution of the first humans, starting from the region of what is now Uganda and Kenya into north, crossing the discussed region into what is now Turkey, and from there into and across Europe and to Asia.

Is the unknown source trying to tell that the roots of the Jewish is anywhere in the sub-Saharan region, Ethiopia for example? 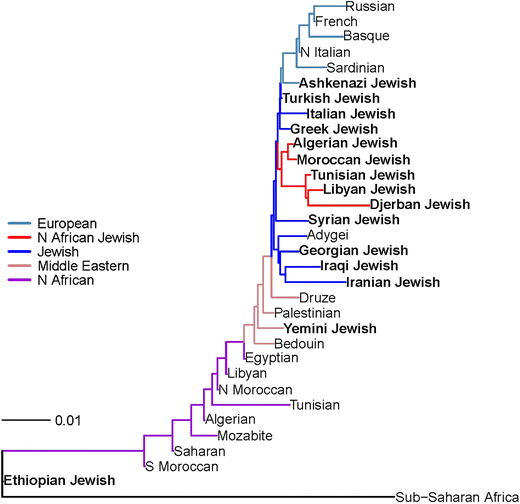 In recent years, many genetic studies have demonstrated that, at least paternally, most of the various Jewish ethnic divisions and the Palestinians – and other Levantines – are genetically closer to each other than the Jews to their host countries. Many Palestinians themselves referred to their Jewish neighbours as their awlâd 'ammnâ or paternal cousins.

According to a 2010 study by Behar et al. titled "The genome-wide structure of the Jewish people", Palestinians tested clustered genetically close to Bedouins, Jordanians and Saudi Arabians which was described as "consistent with a common origin in the Arabian Peninsula". In the same year a study by Atzmon and Harry Ostrer concluded that the Palestinians were, together with Bedouins, Druze and southern European groups, the closest genetic neighbors to most Jewish populations.

One DNA study by Nebel found substantial genetic overlap among Palestinian Arabs and Ashkenazi* and Sephardic* Jews. A small but statistically significant difference was found in the Y-chromosomal haplogroup distributions of Sephardic Jews and Palestinians, but no significant differences were found between Ashkenazi Jews and Palestinians nor between the two Jewish communities. However, a highly distinct cluster was found in Palestinian haplotypes. 32% of the 143 Arab Y-chromosomes studied belonged to this "I&P Arab clade", which contained only one non-Arab chromosome, that of a Sephardic Jew. This could possibly be attributed to the geographical isolation of the Jews or to the immigration of Arab tribes in the first millennium. Nebel proposed that "part, or perhaps the majority" of Muslim Palestinians descend from "local inhabitants, mainly Christians and Jews, who had converted after the Islamic conquest in the seventh century AD".

The problem with generic science is that it isn't telling which generation(s) from a Jewish or Palestinian group that have been researched to base findings like it is written above. Also, such science is in our view cherry picking in the evolution of the Middle East. Because, it is only about comparing one group of people with another group of people. It is even not about defining the geographic roots of anyone's origin but an attempt to prove anyone's identity.

“Ashkenaz” is Hebrew and refers to Germany. However, in this American newspaper we found that 'Ashkenazi'' are those who originated in Eastern Europe. That is weird as 'Ashkenazi'' is adjective and supposed to be to people who are from “Ashkenaz”. But, it looks that Ashkenazi Jews have their origin in a comnplete different part of the world. Here's a citiation from an article written by Eran Elhaik, lecturer in population, medical and evolutionary genomics, University of Sheffield

"It starts in Persia (modern-day Iran) during the sixth century. This is where most of the world’s Jews were living at this time.

The tolerance of the Persians encouraged the Jews to adopt Persian names, words, traditions, and religious practices, and climb up the social ladder gaining a monopoly on trade. They also converted other people who were living along the Black Sea, to their Jewish faith. This helped to expand their global network.

Among these converts were the Alans (Iranian nomadic pastoral people), Greeks, and Slavs who resided along the southern shores of the Black Sea. Upon conversion, they translated the Old Testament into Greek, built synagogues, and continued expanding the Jewish trade network."

With all respect, but we see the failure of realizing that it is about studying a selected link belonging to an endless chain, which gives immense amount of knowledge but only about the selected link, the Ashkenazi Jews.  If you want everything that belongs to the totality in an arrangement, laying out the exact order in which everything became to exist, you need to speak in terms of chronology, whereby scientific fractioning as written above, politics, politicization and even religionization are then irrelevant if they are not connected with one other.

If we look at science of humanity, it is the study of connections. For instance, if you want to know how people though during the 16th and 17th centuries, just look in the arts in writing, painting and what's behind the composing of music. But we don't see this when it comes to a history. It is about, let us say 'everything' that belongs to a history.

"Everything" means here any link belonging to an endless chain. And, every link belongs to one other, is part of one other and is associated to one other even when a link is related to a link ahead of it or way back from it. Because, that particular link can't exist if it is not 'sprouted' from a previous link who also needs to 'sprout' from another link. Each link presents or represents an event, a happening, an occurrence. In first instance, they look different from each other as they may be about different issues in different situations like one is about the Palestinian Jews while the next one is about Palestinian Arabs.

If we go back to the ancient times,  we see that the Philistines, the Amalekites, the Canaanites, the people of Moses, the Hebrews (= Abrahamic people) also don't have a historical continiuty as the history of urbanization did not begin with them. They all have their predecessors too. These predecessors are the early modern humans and they also came from elsewhere as the map below shows . 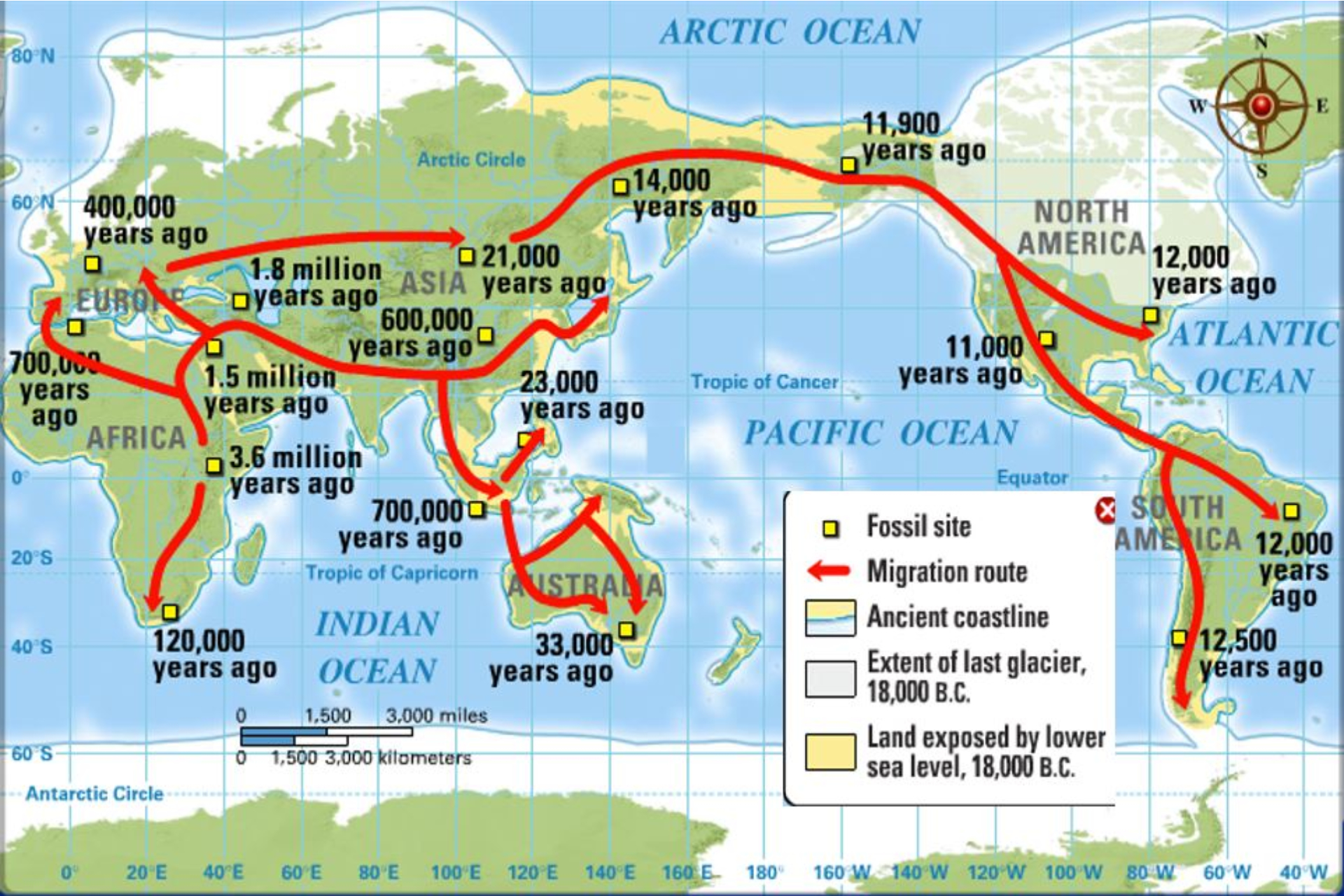 So, you simply can't say that archaeological and genetic data support that both Jews and Palestinians came from the ancient Canaanites. They didn't as they appear to become to exist via extensively mixing between Egyptians, Mesopotamians, and Anatolians. Another strong indication that Israelis don't have any historical continuity.