WELCOME TO PALESTINE ! - page 3: About the first people

ABOUT THE FIRST (BIBLE) PEOPLE

In our country the Netherlands, there's a body naming itself "Center for Information and Documentation Israel". It calls itself 'Jewish'.  But, were does "Jewish" actually come from?

Every 'truth' has a beginning. But not everybody starts from there.

The problem is that even the Israelis do not know were the Israelites really came from. Becoming Jewish and being always Jewish are two different stories. And so is the issue about the modern-day Israelis. All of them became Israelis ... in 1948. So, were does this all come from?

Like it is said, even here the 'truth' has a begin not everybody starts with.

The history of Palestine is the study of the past in the region of Palestine, defined as the territory. The name "Palestine" originally comes from “Philistia,” which refers to the Philistines, and first appeared in the 12th century BC when the ancient Greek historian Herodotus wrote of a "district of Syria with that name.

Philistines are believed to be people of Aegean origin who settled on the southern coast of Palestine. They were at least there when the Israelites arrived (see map above). The Philistines are not indigenous to Canaan. However, there's not much clearness about their roots.

In the Book of Genesis, the Philistines are said to descend from the Casluhites, an Egyptian people. Modern-day scientists appear to have differences in view: from 'Arab descend', Egyptian, and recently even claimed as 'from Greece'. It gives at least the idea that today's Palestinians may not related to the Philistine people, noted that these ancient people have disappeared.

But, the Israelites are also not indigenous people. How did this happen?

Again this question: who started to live on these hills of Jerusalem?

As already said, scholars believe the first human settlements took place during the Early Bronze Age—somewhere around 3500 B.C. That is at least a strong indication that Jerusalem became Jewish much and much later. 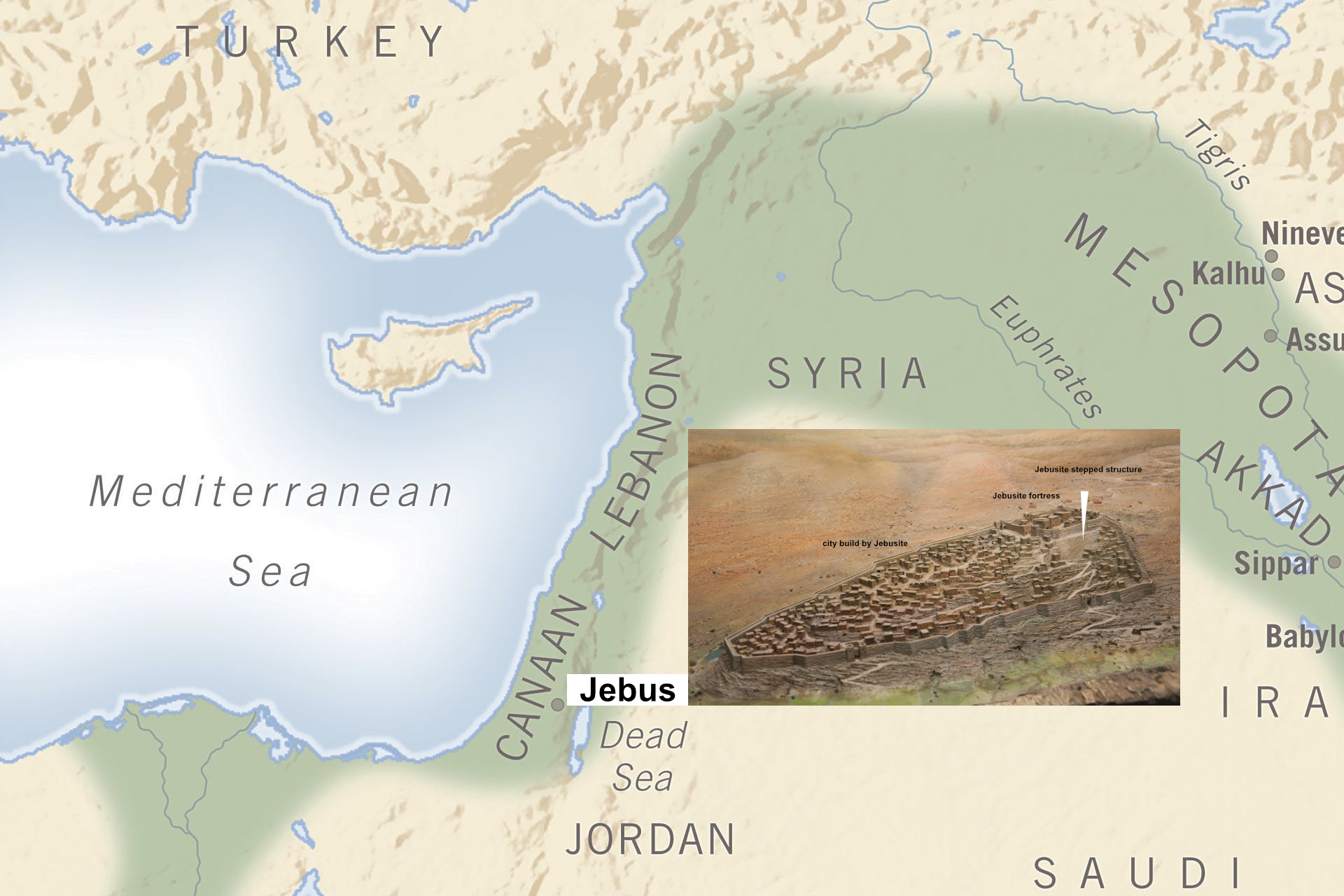 According to (Jewish) scholars, in the Canaanite period (14th century BCE), Jerusalem was named by Egyptians "Urusalim", probably meaning "City of Shalem", after a Canaanite deity. A strong indication that Jerusalem still wasn't Jewish.

Then, Israelites were nomadic people who practiced tribal multi-godization and who arrived in the Amalekite's tribal habitat in what is now the Negev desert, and after the Philistines settled along the southern coast of Canaan, now Palestine. But the Amalekites drove the Israelites into north. This small detail is not told by Jews nor by Christians but those close aligned to Jews.

The historical scientific explanation doesn't align with the this:

Now from a religious point of view this question: Who did already live in the area, noting that the two groups had to arrive, one from ancient Egypt and the other group from  Ur in Mesopotamia.

That brings us to the phrase "promised land", which is also adjective as it is written as a referral to Abraham (Ibrahim) who is described as a prophet. But, it is also a referral to Moses (Musa).

So, God made a promise two times and to two different people?

But, notice what is to read in the referral to Abraham as "nations' and 'kings' are plural, which reads as references to today's 'countries' and 'leaders' and that is exactly how the world still is today.

Stories like those of Moses and Abraham are written in a particular age were the world was different, were the people were different, and were the way of thinking was different. So, the way things in the Old Testimony has been written had to be read the way it was meant to be read .... as from that time. The more people get evolved, the more their way of thinking modernizes, the greater their distance from an originality or roots. For instance:

The story of the Tower Of Babel you just have read is NOT its original but  -what is called the New International Version or NIV.

The initial story may be something we would like to reflect this way:

Once , there was one world, one people to whom God have given one language, one thinking, so the unity of One .

But, the people have asked God for more. God asked the people what they would like to have more. The people wanted knowledge. God gave the ability and the skills to learn. Then, people asked for their own kingdom. God gave them a kingdom.

Still, the people were not satisfied as they wanted more than the kingdom they've had. They wanted the same place were God is. So, they started to build.

When the people reached God's place, they were punished as God took everything they have away. The world, once one, is shattered into pieces and so the unity of one people now spread over all these shattered pieces.

If we materialize both NIV version and our own reflection, "shattered pieces" refers to the state our planet was at the beginning of the prehistoric ages:

One continental shelve broke in pieces (in modern times known as tectonic plates), which floated away from one other to become the continents we still know today.

So, we see a link between the 'Tower of Babel' and the story of Abraham because of this question: were the stories written to mean something other than religion? The answer? You have to think outside the modern-day box to realize that is a way of documenting that part of history.

Throughout history, various groups of people have considered themselves to be the chosen people. The phenomenon of a "god's chosen people" is centuries old.

There is no conclusive information that tells us how exactly people thought at the time when they started to record events we can read in religious books, whether it is the bible or the Koran. We only know what was written but only after and from interpretation, reinterpretation to modernization of reinterpretation. The basis of all this is what it is known from times centuries after Christ and Mohammed.

One of the four earliest known recording appears to be the Codex Sinaiticus,  an Alexandrian text-type manuscript written in uncial letters on parchment and dated paleographically to the mid-4th century after CE*.

Other codex are the Aleppo Codex (c. 920 CE*) and the Leningrad Codex (c. 1008 CE*). The authors could only have written if there were sources.

These sources are inscriptions on (clay) tablets as they were the medium before parchment became in use. It is even not known who the authors (name of the engravers) of the inscriptions on tablets where. 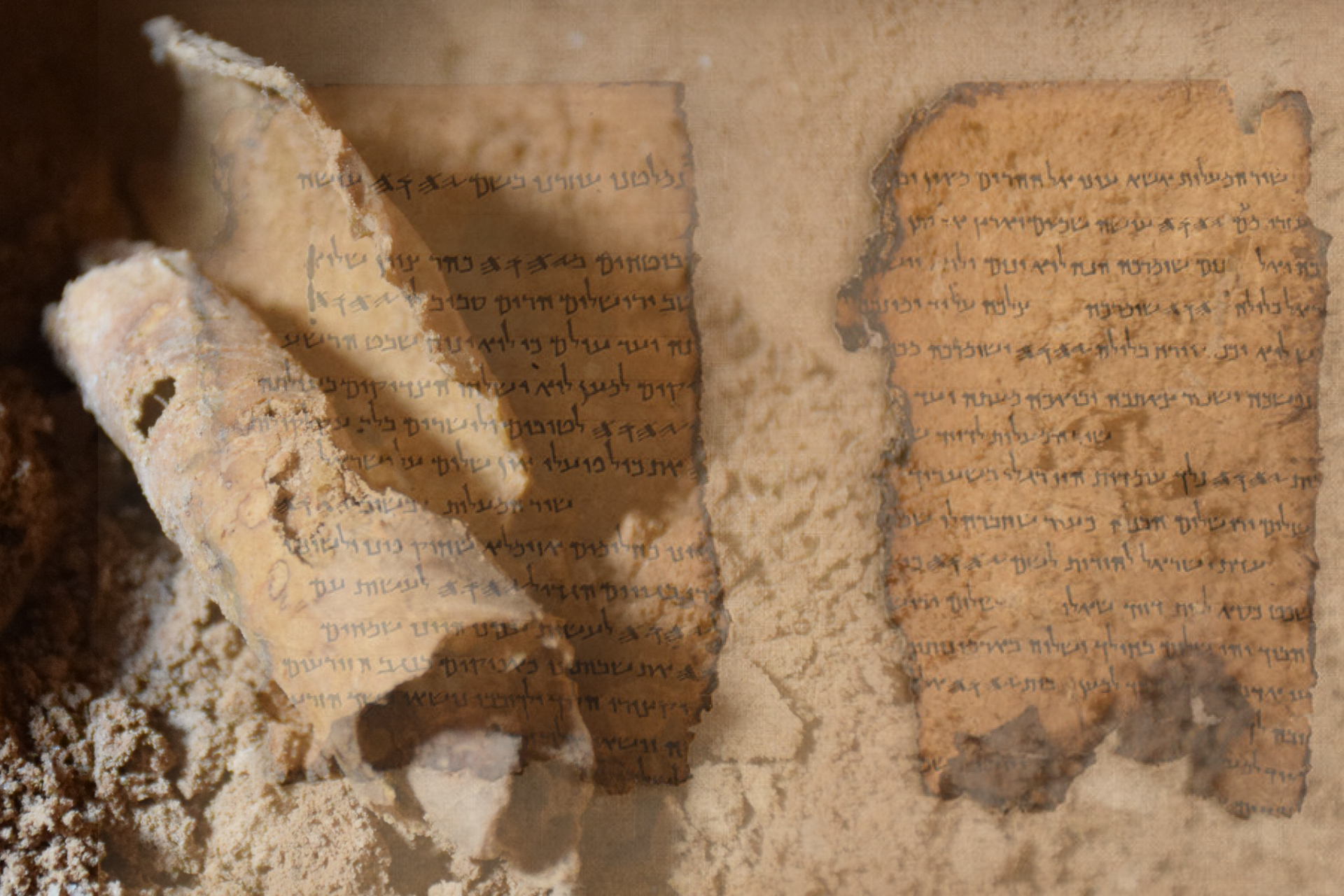 Another example are the Dead Sea scrolls which in 1947 were found in a cave, not caves near  Khirbet Qumran in the West Bank.

The Israelis only mention that the scrolls are in Hebrew while there are also scrolls found written in Aramaic and in Greek, which partially answers the question who wrote them, namely authors from three different groups of people.

Like the found remaining pieces of tablets, it is about pieces or fragments from ancient documents. So, each found ancient documents misses parts of handwritings, which makes it impossible to learn the exact meaning of the content on each document even when you use the most advanced technology like artificial intelligence.

The first people who started to record did the same as what we do in modern times, namely quoting and referring to who- or whatever a record might have been come from, like this example which we have used before:

Genesis is not a person as it means "In the beginning" and is the title of, what is called a book. That book does not have the age of the biblical events as it is written when "In the beginning" already had taken place. Nobody knows to what time "In the Beginning" really refers to unless we put it in the context of the evolution of our planet (see image on the right).

We also would like to remind the reader that "nations and who would be kings" are plural, which suggest that 'nations' is symbolic for world, because you don't read 'land' in the referral to Abraham.

So, if Genesis is only the name of a title, then who wrote it, when was written and on what was it originally written?

The Israeli claim that says they're the "god's chosen people" appears to be hollow as there is no ancient handwritten document that support their claim.

*) Before Common Era (BCE) and Common Era (CE) are abbreviations used by the Jewish for the reason, what they claim,  "to avoid religious partiality". But, the Jewish religion is partial. First, because of their own god. YHWH, which is not the god of the Israelites (Britannica) as they had a tribal belief of multigodization,  Second, their belief stops there were the New Testimony begins.