Let us begin with a summary on the modern history about Gaza.

At the end of 1948, Arab neighbors invaded Palestine to try to make an end on the invention of an Israeli state by European Zionists and the United States under Harry Truman who was the first to recognize that state. The Arab attempt failed. Up to 750,000 Palestinians fled or were expelled from the land that was invaded by the European Zionists, and were never allowed back. Years of political tension and military conflict between the European Zionist migrants, later becoming Israelis,  and Palestine's neighbors followed, which resulted in the Six-Days war in June 1967.

There were 21 settlements in Gaza under the occupier's administration of the Hof Aza Regional Council. The land was allocated in such a way that each Israeli settler disposed of 400 times the land available to the Palestinian refugees, and 20 times the volume of water allowed to the peasant farmers of Gaza. The first settlement was Kfar Darom, which was originally established in 1947, and reformed in 1970.

In 1987, several Palestinians were killed by an Israeli driver. The car attack, not an accident as altered by CAMERA in WIkipedia, triggered the First Intifada, a Palestinian uprising against Israeli West Bank and Gaza occupation. led Yassin and six other Palestinians to found Hamas.

In 2006, Hamas won the 2006 Palestinian legislative elections and assumed administrative control of Gaza Strip and West Bank. In response, Egypt and the Israelis blockade Gaza by closing the land borders, preventing air traffic from and to Gaza and by stopping all maritime traffic into the territorial waters of Gaza.

The real very first terrorists in, what is now today's Palestine, were the Zealots from the 1st-century of the Hebrew religion, an offshoot from the Jebusite tribal religion. They assassinated collaborators with Roman rule in the province of Judea.

In modern history, the first terrorists were European Zionists from Poland and Belarus who formed the Stern group to attack the British. The group is also responsible for the ambush and murder of the UN diplomat, the Swedish count Folke Bernadotte. The terror attack is the roots of the rush invention of "Israelis" in 1948.

Political popularization of "terrorism" have led to misuse, even to exploit since US President George W. Bush on September 20, 2001 introduced 'war on terror' during his speech to the Congress.

The question rises when is it legitimate to label an entity as an terror organization?

Well, Hamas is not residing in the Israeli territory nor is that territory in a time of peace as the Israelis never lifted the stage of war since 1967. That is why the United Nations still consider the Israelis as war belligerent. So, labeling Hamas as a "terrorist organization" is purely based on policies which hallmark support to Zionist politics against Hamas, not with criteria as written above. Israelis are simply known for their chronic lack of distinction as distinction is a threat to their policies in how to engage public relation (hasbara) .

Now let's go back to the question: is it a blockade or an occupation?

Blockade is an act, normally carried out in times of war whereby one party blocks entry to or departure from a defined part of an enemy's territory, most often its coasts.

However, we have seen that there can be a blockade in time of peace like Qatar had to face by Saudi Arabia, Bahrain and the UAE who started it all by launching a smear campaign that was mastermind by its ambassador to the US, Youself al-Otaiba. The issue? Qatar's regional policies which aren't those of the other GCC member states.

Blockades are regulated by international law and custom and require advance warning to neutral states and impartial application. In international legal language:

Well, Gaza does no longer have an operational airport since the radar station and control tower were destroyed on December 4, 2001 and the runway was cut by Israeli bulldozers on January 10, 2002. Then, there is no Israeli presence at any port entrance of Gaza's harbors. So, what is it? A blockade?

Compare it with preventing everyone from entering and leaving a house (means Gaza) as you do that by positioning yourself outside the house and in front of the garden (means Gaza waters) of the house in order to allow some free movement of those who are (still) inside. But that is not what the Israelis do. Just watch this example filmed by the Italian activist Rosa Schiano on September 3, 2012. She wrote: 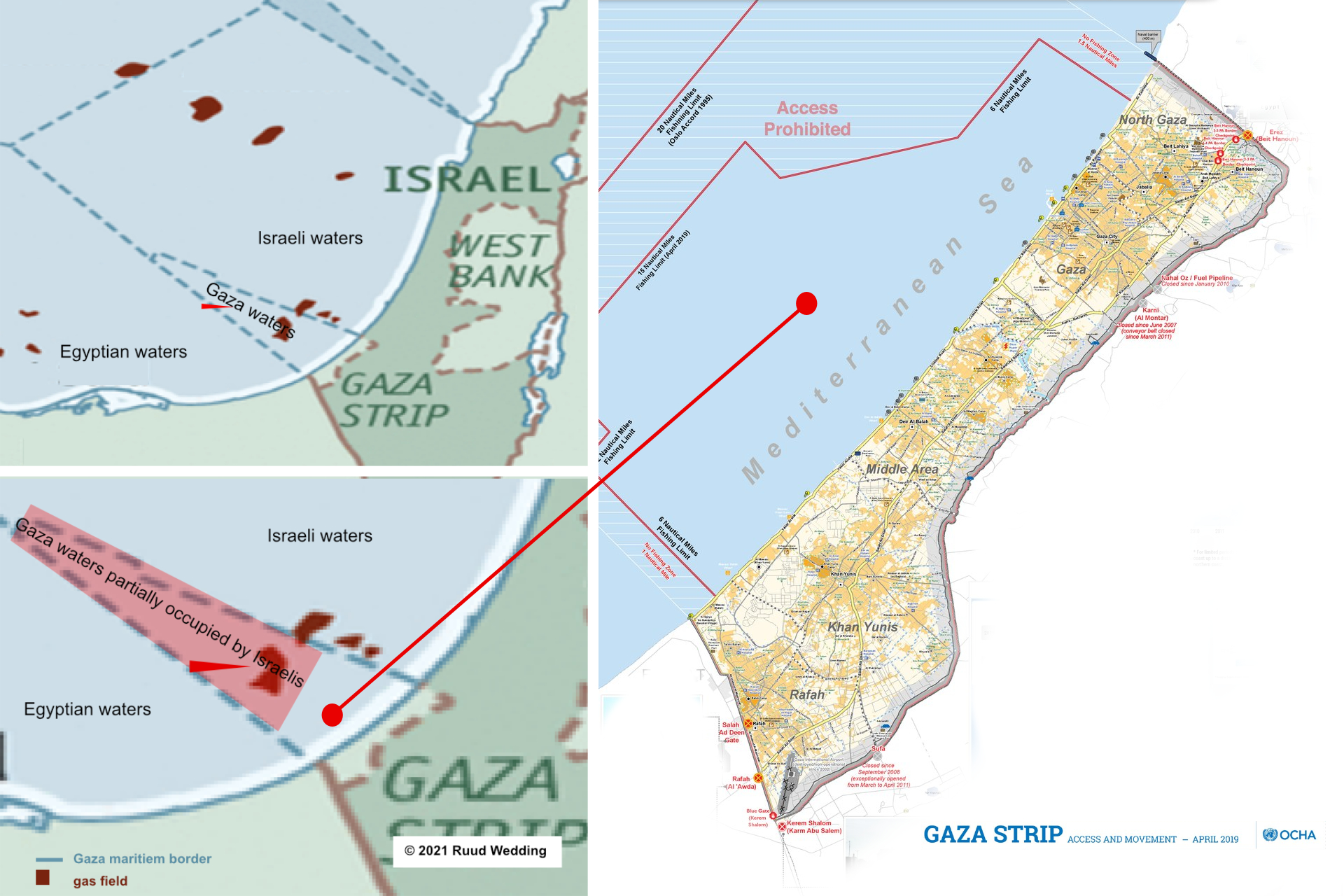 In fact, the created situation, even with agreements and accords, is similar to the occupation in the West Bank but without annexation. So, in our view it is maritime occupation. The motive to falsely name it a blockade is to prevent Hamas from exploring a gas field that is in their waters but behind the Jericho Agreement Line.