What Makes An Island An Island?

December 17, 2015 -- Vietnam's military is steeling itself for conflict with China as it accelerates a decade-long modernization drive, Hanoi's biggest arms buildup since the height of the Vietnam War.

The ruling Communist Party's goal is to deter its giant northern neighbor as tensions rise over the disputed South China Sea, and if that fails, to be able to defend itself on all fronts, senior officers and people close to them told Reuters. Vietnam's strategy has moved beyond contingency planning. Key units have been placed on "high combat readiness" - an alert posture to fend off a sudden attack - including its elite Division 308, which guards the mountainous north. The two countries fought a bloody border war in 1979. The likely flashpoint this time is in the South China Sea, where they have rival claims in the Spratly and Paracel archipelagos.

"We don't want to have a conflict with China and we must put faith in our policy of diplomacy," one senior Vietnamese government official, who spoke on condition of anonymity. But we know we must be ready for the worst."

Most significantly, Hanoi is creating a naval deterrent largely from scratch with the purchase of six advanced Kilo-class submarines from Russia. In recent months, the first of those submarines have started patrolling the South China Sea, Vietnamese and foreign military officials said, the first confirmation the vessels have been in the strategic waterway.

December 27, 2015 -- A group of Filipino protesters has landed on a disputed Philippine-held island in the South China Sea, a local government official said on Sunday, in a risky expedition that may trigger a strong reaction from China.

About 50 protesters, most of them students, reached Pagasa island in the Spratly archipelago on Saturday in a stand against what they say is Beijing's creeping invasion of the Philippine exclusive economic zone, said Eugenio Bito-onon, the island's mayor.

"The 'freedom voyage' arrived at about 8:30 a.m. on Saturday from Balabac island on a motor launch," Bito-onon said, adding the protesters left southern Palawan on Thursday in fine weather to make the long sea crossing.

China claims almost all the South China Sea, believed to have huge deposits of oil and gas, through which about $5 trillion in ship-borne trade passes every year. Brunei, Malaysia, the Philippines, Taiwan and Vietnam also have claims on the strategic waters.

Describing their expedition as a "a patriotic voyage", the protesters, led by an ex-marine captain, planned to camp on Pagasa for three days in a symbolic act of defiance against China.

"We encourage the highest leadership of the country to inform the people correctly without sugar coating the truth about Chinese invasion of our exclusive economic zone," the protesters said in a post on Facebook.

Government and military officials had tried to prevent the group from sailing to the disputed waters, citing security and safety reasons after a storm in the South China Sea earlier this month.

The Philippines was also concerned about China's reaction to trip as Manila has been trying to calm tensions heightened by Beijing's rapid expansion in the South China Sea - building seven artificial islands in the disputed waters.

The Philippines has challenged Beijing before the arbitration court in The Hague, a case Beijing has not recognized.

A spokesman for Philippine President Benigno Aquino said in a radio interview on Sunday the military was closely monitoring the trip and would assist the protesters if necessary.

On the video below, taken on May 20, 2015, you can hear the Chinese navy repeatedly warning the U.S. Navy P-8A Poseidon plane to leave airspace around disputed islands in the South China Sea. It says:

"Foreign military aircraft, this is Chinese navy. You are approaching our military alert zone. Leave immediately," a Chinese naval officer warned the U.S. plane, "Your action is unfriendly and dangerous. Please go away quickly."

The Chinese navy repeatedly warned the U.S. Navy P-8A Poseidon plane to leave airspace around disputed islands in the South China Sea. "Foreign military aircraft, this is Chinese navy. You are approaching our military alert zone. Leave immediately," a Chinese naval officer warned the U.S. plane, "Your action is unfriendly and dangerous. Please go away quickly."

U.S. Sailors assigned to Patrol Squadron (VP) 45 conduct flight operations aboard a P-8A Poseidon over the Spratly Islands in South China Sea, May 20. VP-45 is on deployment supporting U.S. 7th Fleet operations in the Pacific.

Now, there are three elements in the ongoing dispute provoked by the Chinese while other parties only react on the Chinese provocations. It's about land, sea and air. My interest goes to land and air.U.S. Sailors assigned to Patrol Squadron (VP) 45 conduct flight operations aboard a P-8A Poseidon over the Spratly Islands in South China Sea. VP-45 was on deployment supporting U.S. 7th Fleet operations in the Pacific.

Let us first look at this:

Is there something you find obvious on these images? Many wouldn't but some do ... Much of these pieces were never islands before. They're made or turned into islands.

That brings me to a question: when is any piece of land in the waters of the South China Sea an island and when not? To answer this question we have to ask ourselves how to answer at all? Because, there are two ways to give an answer. One is abstractive and the other is in the perspective of the international law. So, let's do abstractive first:

In Wikipedia, an island is any piece of sub-continental land that is surrounded by water. Very small islands such as emergent land features on atolls can be called islets, skerries, cays or keys. An island in a river or a lake island may be called an eyot or ait, or a holm. A grouping of geographically or geologically related islands is called an archipelago, e.g. the Philippines.

In Britannica, island is any area of land smaller than a continent and entirely surrounded by water. Islands may occur in oceans, seas, lakes, or rivers. A group of islands is called an archipelago.

When talking dictionary style you will find this:

Now look at how it is defined by the UNCLOS: “a naturally formed area of land, surrounded by water, which is above water at high tide.”  My response would be: what is then it at low tide? Just look at the images of the created land masses again. They're all pictured at low tide. I even can interpret this way: UNCLOS’ requirement that an island be naturally formed should mean that an island be created naturally.

I'm not finished yet as article 60 from the UN Convention On The Law Of The Sea  says that countries may “establish reasonable safety zones around artificial islands” and that “artificial islands, installations and structures do not possess the status of islands.”

What I find obvious here is that "artificial islands" is not mentioned as being inherent to "islands"  but differentiated from "islands". That sounds to me that the Chinese reclamation activities are simply illegitimate if not illegal.

A reef is a rock, or sandbar, or other feature lying beneath the surface of the water. Many reefs result from a biotic processes—deposition of sand, wave erosion planing down rock outcrops, and other natural processes—but the best-known reefs are the coral reefs of tropical waters developed through biotic processes dominated by corals and calcareous algae. What does this mean in the context of this story?

The Chinese are have not modified the natural state of a land mass. They have expanded the state a biotic process have produced. That can never be named "territory".

Coming to the second aspect: the air.

The Chinese warned by saying "Foreign military aircraft, this is Chinese navy. You are approaching our military alert zone. Leave immediately," a Chinese naval officer warned the U.S. plane, "Your action is unfriendly and dangerous. Please go away quickly." 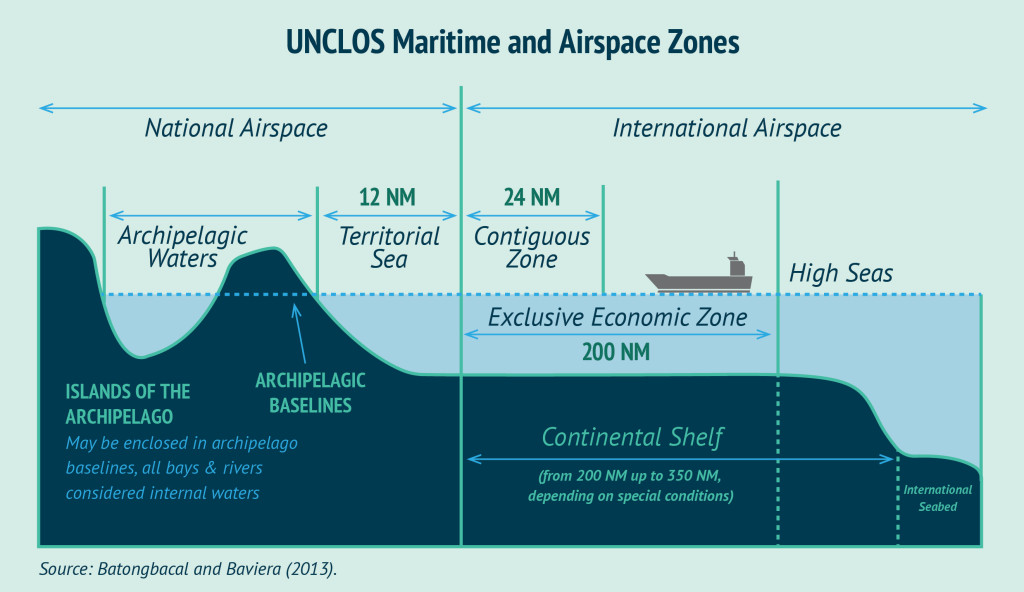 Above you see a diagram. It shows how UNCLOS defines the divisions in both horizontally and vertically directions. You clearly can read "islands of the archipelago" It does not include the word "artificial" while all Chinese activities are man-made, so not naturally created nor naturally formed. This means that the Chinese cannot claim that the air above their activities as "our military alert zone" nor can it claim that the same air is their national airspace. So, the Americans have their right to fly in both airspaces as showed on the diagram.

And what about the waters surrounding the Chinese activities?

The answer goes the same as we and even the Chinese can't speak about (their) territorial waters because it is not about land masses that are naturally formed and/or created naturally. So is any EEZ around the waters surrounding the activities not legitimate if not illegal.

Now, the Chinese have warned all parties not to provoke but I see only one who is provoking:

Martime Asia Security (MAS) is part of GLOSM.ORG and monitors developments that have happened or are still happening in the South China Sea, the international use of Taiwan Strait, and East China Sea.